I recently read an article from Bloomberg, an online international news reporting site, that described the relationship between motherhood and the economy. When it comes down to it the article says these three main points:

1. The Progress of Women in the Workforce

Now we all know that history states that in World War II women entered the workforce in America because there weren’t enough men to fill the jobs to keep the economy going. After World War II we had the fight for women’s rights and women’s rights movement so that we all could keep our jobs. These allowed for both men and women to join the workforce which, in-turn, boosted the local, national, and global economy.

In the last few decades this lovely progress has stalled out because (1) lack of equal opportunity and (2) women have to make choices between working and when or whether to not to have children. When women do decide to have kids they than have to choose whether or not the cost of childcare is worth working, that’s not even considering the lack of workplace flexibility. If, for example, a woman decides to go back to work but can only work the afternoons (because that’s when her significant other is home to attend to the children) then her employer before baby says that afternoons just don’t work for them. Now she has to decide if paying for childcare is worth going back to work now or should she wait until her baby is in school? The issue of waiting is deemed ‘the sagging middle’ (I personally don’t appreciate this name) which we’ll discuss later.

I’m going to let this chart from the Bloomberg article do the talking on this one. 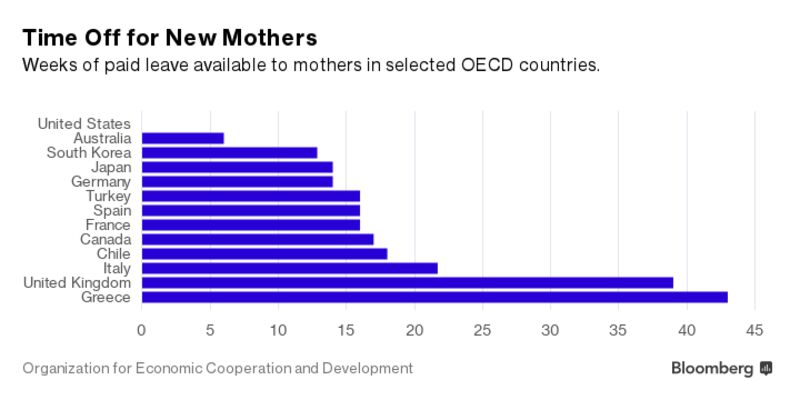 A unique factor facing American mothers is the U.S.’s lack of paid maternity leave. Almost every developed country guarantees mothers paid time off when they have a child. On average, the 35 countries in the Organization for Economic Cooperation & Development (OECD) offer 18 weeks of paid leave. The U.S. guarantees none.

This is and will always be a WTF? moment. I seriously don’t understand how this country undervalues women with new babies and new families so grandly. A little while back I watched a documentary on maternity leave rates around the world titled Maternity Leave where they discusses that there are only two countries in the world that do not offer paid maternity leave for all working women. The United States is one and Papua New Guinea is the other. Funfacts about Papua New Guinea’s treatment of women:

Papua New Guinea society clearly does not treat its women and children well- yet they have six weeks paid maternity leave for governmental workers. They are better than us as far as maternity leave goes, which is sad and a little frightening to be honest. The US really needs to get it’s shit together.

Women in the U.S. participate in the workforce at high rates in their 20s—but fewer of them are working in their 30s and early 40s, return to work in middle 40s to work until a late retirement. “The Sagging Middle” is what economists have dubbed the phenomena, a poor naming choice but what can I say? That time out of the workforce interrupts peak earning years for women, particularly mothers; for the rest of their careers, perhaps once their kids are older, they must make up for lost time and money. The number of women working well into their 60s and 70s has surged in the U.S., as more of them postpone retirement.

To make more sense of this let’s put it in simpler terms: While women are taking time off to have and raise babies during their “Middle Career” men are still working. While the women are not bringing in any income or gaining experience, men are. When women return to work when their children are in school they are very far behind compared to their male peers that they have to work longer to make up for lost time and money.

Overall the system sucks and major policy overhauls and societal ideas need to be made for better workforce equality, the ability to balance work and family, and the mental/ emotional/ physical health of America’s women.

View all posts by neotericbohemian

Hello there, my name is Megan Hoag. I am a certified birth doula and certified postpartum doula acquired through the International Doula Institute. I have been drawn to pregnancy, birth and motherhood for a long time but just recently decided to pursue a career in the field. Currently I'm living with my boyfriend and frisky kitten in Buffalo, NY. I can't wait to meet and work with you!