Hello Everyone! If you didn’t read part one click here!

“Despite its established benefits, breastfeeding is no longer a norm in many communities. The main reason is because a breastfeeding mother needs support measures at many levels, from legal and policy directives to social attitudes and values, women’s work and employment conditions, and health-care services to enable women to breastfeed”. In the United States forty-save states, DC and the Virgin Islands have laws the specifically allow moms to breastfeed in any public or private location. South Dakota and Virginia exempt breastfeeding moms from public indecency or nudity laws, while Idaho doesn’t have anything that protects breastfeeding moms except they’re exempt from jury duty. There is a law deemed “Break Time for Nursing Mothers” that was signed into legislation with the Affordable Care Act in 2010. This law states that each employer must provide a reasonable break time for an employee to express breast milk for her nursing child for one year after the child’s birth each time such employee has need to express the milk.

The federal US government at least seems to

consider breastfeeding an important public health concern, the main issue is that it’s not the cultural norm nor are people adequately educated on the topic. Speaking to education: the main source for the general public is the internet. The issue with this is that Anyone can write whatever they want on the internet. Popular sites can be paid to advertise for certain companies or even write leaning articles that could influence people’s decisions. For instance CafeMom has written the article 10 Scientific Facts About Formula Feeding by Judy Dutton. This article is the first on the list provided by google when you search “Breastfeeding versus Bottle Feeding”. Some of the information is fairly decent, the other parts not so much; such as it says “Formula Fed Babies Are Happier”. This is simply false, each baby is different on how much their stomachs can hold and how long that will allow them to be content. Over feeding is bad, which is what typically happens while bottle feeding because mothers want their babies to eat a “full serving”. Also every person has a different temperament, breast or bottle feeding isn’t going to change this fact. Even if it did (I’m not saying it does, but playing alone for a moment) you want to give your newborn something that’s going to make him dull and nonreactive- Why? Just get to know your baby and their needs and you’ll soon find a way to a happy relationship.

The issue here is that you can legitimately find any answer you want on the internet. If you want real information you must dig for it, even then you must take it with a grain of salt. The reason being is that companies or interested parties can also fund research results that agree with their goals. The best research is by outside parties that just want to know true answers and don’t have a ‘side bet’ on the results.

A few of the outside (third) parties researched the more prominent public concern topics including; immune system quality, intelligence, and economic growth/losses. Rollins found that not breastfeeding is associated with lower intelligence and economic losses of about $302 billion annually or 0.49% of the world gross national income They concluded that breastfeeding provides short-term and long-term health and economic and environmental advantages to children, women, and society.

Mohrbacher summarized that babies on formula have increased cases of: respiratory diseases, diarrhea and digestive issues, ear infections, UTIs, meningitis, and SIDS. They also studied adults that were formula feed whom seemed to have an amplification of allergies, asthma, Crohn’s disease, diabetes, ulcerative colitis, Hodgkin’s disease, Leukemia, celiac disease, childhood and breast cancers, and obesity. One study found that in the US an infant only being bottle fed has an increase of death by 27 percent. Clark found that in Chinese infants, ages nine months to a year, there is a risk of iron deficiencies in exclusively breastfeeding or mixed feeding (formula and breast milk) . This could be due to the region that they studied or something that needs to be considered everywhere, more studies are needed to make further conclusions in this area.

Taking everything into consideration, there are numerous aspects to consider when making the decision of whether or not to breastfeed. Then if you do decide to breastfeed you must determine how long to do so. The American Academy of Pediatrics recommends that babies be exclusively breastfed for about the first 6 months of life. This means your baby needs no additional foods (except Vitamin D) or fluids unless medically indicated. Babies should continue to breastfeed for a year and for as long as is mutually desired by the mother and baby.

not they decide to breastfeed including: Bonding/Attachment; Body Image; Self Esteem/Confidence; Female Role Models; Family and Support Network; Lifestyle; Formal Information Sources; Knowledge; and Feeding in front of others/Public. They concluded “the review identified a significant bias in the data towards negative factors relating to the breastfeeding decision, suggesting that infant feeding was not a choice between two feeding options, but rather a process of weighing reasons for and against breastfeeding. Findings reflected the perception of the maternal role as intrinsic to the expectant mothers’ infant feeding decisions. Cultural perceptions permeated personal, familial and social influences on the decision-making process. Expectant mothers were sensitive to the way professionals attempted to support and inform them about infant feeding choices.” Basically it’s difficult to go against the social norm even if it is for the mental, emotional, and physical benefit of mother and child.

To help support those families that would like to go against the crowd, Sue Ashmore the director of the Unicef UK Baby Friendly Initiative says there are four things that health departments must do to build a society supportive of breastfeeding: 1) Develop a National Infant Feeding Strategy Board in each of the four nations, tasked with creating a strategy and plan to deliver the goal of ensuring more babies are breastfed. 2) Include breastfeeding in all policy areas where it has an impact: obesity, diabetes and cancer reduction; emotional attachment and subsequent school readiness; improved maternal and child mental health; wellbeing in the workplace and environmental sustainability. 3) Implement effective evidence-based initiatives such as the Unicef UK Baby Friendly Initiative across all maternity, health visiting, neonatal and children’s centre services and local peer to peer support. 4) Protect the public from harmful commercial interests by adopting, in full, the International Code of Marketing of Breastmilk Substitutes.

The following is a chart that truly compares breastfeeding versus formula feeding with the positives versus negatives shown clearly created by the American Pregnancy Association. Please review below: 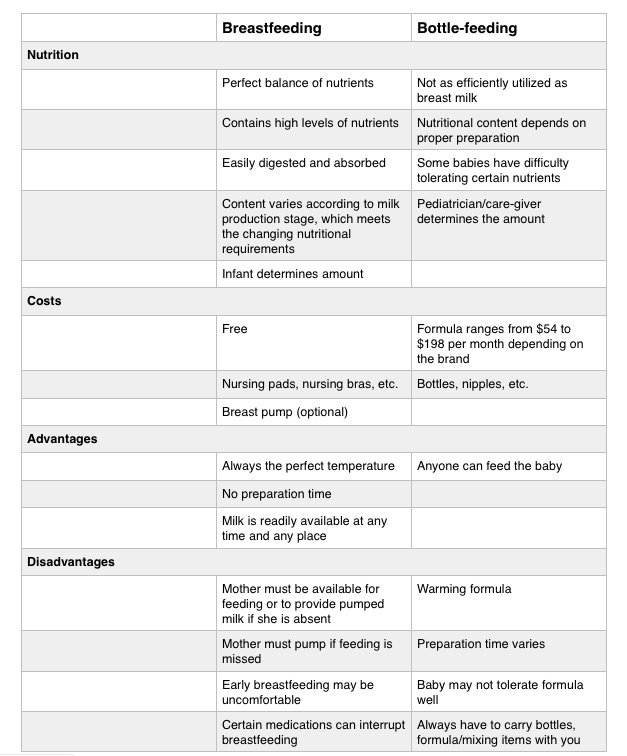 In conclusion, there’s a lot of information out there. Some from your care provider, some from scientific studies, some that’s paid for, and some from random people that like to voice their opinions. It may seem as though this research has led you to conclude that I detest formula feeding, this is untrue. In some cases formula is absolutely necessary for a baby’s survival. Say a mother has had breast cancer, or breast reduction surgery; physically her breasts are different. She may not be able to produce enough milk because her ducts and nipples didn’t restore into proper order. You could also consider a case of abandonment or maternal death: formula or donation milk is the only way a newborn is going to survive. There are also cultural and society restrictions that are in place to consider, it all just depends on individual situations. The main point that I would like to get across with this article is that I’d rather talk about removing the barriers that stop women breastfeeding, and then allow mothers to carry out their own informed decisions with dignity and respect. In the end ‘be it tube, bottle, or breast well fed is best’. You have to make the decision that is best for you and your growing family, disregarding whenever outsiders force their opinions upon you.

Thanks for reading!
Megan

View all posts by neotericbohemian

Hello there, my name is Megan Hoag. I am a certified birth doula and certified postpartum doula acquired through the International Doula Institute. I have been drawn to pregnancy, birth and motherhood for a long time but just recently decided to pursue a career in the field. Currently I'm living with my boyfriend and frisky kitten in Buffalo, NY. I can't wait to meet and work with you!